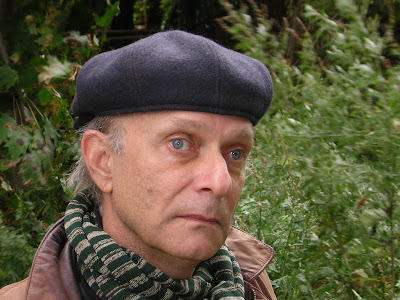 In this week's Umbrella Talk, Don Druick talks about fear, the pen/computer dance, and the changing nature of popular culture.

In a career spanning more than 40 years, Don Druick's plays have been produced on stage, radio and television in Canada, Europe, Japan, and the USA.

His publications include playtexts, translations and critical writing (in Descant, and the Canadian Theatre Review). Publications of his plays, Where Is Kabuki? and Through The Eyes, have both been shortlisted for the GG

His current plays are:
• Georgeville - Passion and poetry in Quebec’s Eastern Townships, 1816; the darkest night of Lord Byron
• Wildest Dreams - a deconstructed narrative; something close to love amongst the elders
• The translation of Emmanuelle Roy’s play, Lazette.

What do you drink on opening night?
A glass of something red and Italian always makes me happy.

Who would direct the coolest production of one of your plays?
I’ve worked with some lovely directors over the years. Anybody basically who can bring fun and intelligence, a respect for the text, and a creative POV to the project is OK by me.

What scares you? What can't you write about?
As is often said, there’s nothing like fear for focusing the mind. So fear is conceivably a gift to the writer. Tornados scare me. Violent mobs. Choking to death. But its hard to represent these things convincingly on the stage. At best only symbolically. Or to put it another way: for me writing is an articulation of self. Each play, as finished, allows the possibility of a further articulation. What I fear today only allows tomorrow’s fears to come charging through. I guess that’s the blessing.

What do you want to write about that you haven't yet?
I’ll know it when I see it.

If someone was to write a play about your life, what genre would it be? (eg. comedy, tragedy, melodrama, horror)
A romantic comedy without the comedy.

How do you deal with praise? With criticism?
Hey, I likes a good bit of praise - as slushy and gushy as you can make it. As for the other thing (and I take it you don’t mean intellectual contextualization but rather just plain old negative shite), well let them say what they will.

Where would you like your work to be produced?
Wherever always seems the right place.

Where do you write? Pen or keyboard?
I like to write in my kitchen, a large room with much old wood and glorious light. And I do both pen and keyboard. Notes into the machine. Text written. Printed up. Worked with a pen. Put back into the computer. Reworked. Reprinted. Etc etc etc....

What would you like academics to write about your work in 50 years?
Theatre is already a marginalized artform. When my granny was an opera singer at the beginning of the 20th Century, the complete and only experience of narrative was live. And now with all that passion and obsession that our culture has with digital capture and digitalization and digital blah blah, we theatre folks hardly seem to factor anymore. Couple this with the notion that the future is clearly not like the present. And consider as well that its not a big stretch to suggest that the academy is as susceptible to fashion as any other human institution. So what will they say in 2059 when I’ll be dead and gone (and probably most of you reading this as well)? I haven’t the foggiest. And really, I don’t care, just as long as they spell my name right.

What inspires you?
Situations simultaneously both complex and simple.
Umbrella Talk