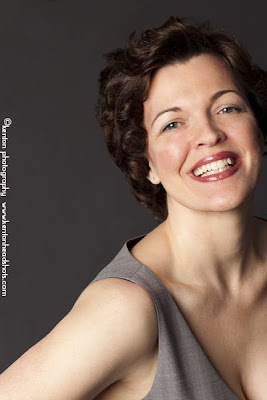 In this week's Umbrella Talk, Lucia Frangione talks about opening nights, her inability to write tragic endings, and the sensuality of her work.

A little More About Lucia Frangione

Lucia is an internationally produced and published playwright and award winning actor, best known for performing in her own works: Paradise Garden, Espresso, MMM, Cariboo Magi, Chickens, and Holy Mo. She is the recipient of the Gordon Armstrong and Sydney Risk playwright awards. Espresso was nominated for seven Jessie awards and toured Western Canada in 2004, and has been running for a year at the Jelenia Gorski theatre in Poland. She is currently a commissioned writer for The Arts Club and is developing a new play, Sanctuary, with singer songwriter Aaron Krogman. Her eighteen plays have been produced by theatres such as The Belfry, Ruby Slippers, Solo Collective, Chemainus Theatre and Prairie Theatre Exchange. Lucia will world premier her new play Leave Of Absence with Pacific Theatre in the fall of 2010. Her debut short film, Pop Switch, is currently screening at film festivals internationally.


What do you drink on opening night?
One glass of pinot noir makes me charming. Two glasses and my clothes come off. Three glasses and I am dead asleep under the table. How many glasses I drink depends on how good or bad the show is.

Who would direct the coolest production of one of your plays?
I have a wishlist of directors. They include Vanessa Porteous, Kim Collier and Danny Brooks to name a few. The top of my list is still Morris Ertman. He has directed several of my plays now. He understands my rhythm, he understands my spiritual sensual exploration, he knows how to stage my swirling feminine epic stories. He is deft and visually brilliant. He knows how to speak to actors and designers. A rare combo.

What scares you? What can't you write about?
Though I write with tragic events in my plays and am no stranger to pain and despair, I can't seem to write a tragic ending. My upcoming play for Pacific Theatre is Leave Of Absence and though it involves the death of a child, I just had to find some hope for the parent in the second act. I had to find her a reason to live. I wrote it before my nightmare came true and my own baby died. And I think of friends who recently lost their only child....I have a desperate double reason for wanting that second act.

I don't like the absurd very much either. It's important for me to find the thinnest thread of hope and beauty. In fact, the thinner the better. (the hope that is, the beauty can be absolutely full figured) A well earned happy ending? Gold. One night I decided to not believe in the Divine for about ten whole minutes. It was so depressing I wanted to shoot myself. I think atheists are brave and amazing. I admire that resolve. That ability to find joy under those circumstances? Wow. Truly. I can learn from that. Sometimes I challenge myself and ask, "Lucia, do you just believe in God because you can't handle the idea of your own mortality?" You know, maybe. I don't like death one bit. Feeling trapped is frightening to me. To think I am trapped into a time frame like mortality pisses me off. The Divine gives me endless mystery and possibility. It gives continuation to the souls I love and have lost. And yes, this gives me comfort and it makes me courageous. I'll take my chances with believing. It just makes sense to me spiritually and scientifically.

What do you want to write about that you haven't yet?
The title is Psychobilly Cleopatra. The undead spirit of Cleopatra emerges in the tattooed greaser hot rod world of psychobilly. For some reason, these things go together for me and it delights my brain. My sister fronts the Calgary based band Eve Hell and the Razors and I want to have her compose all the music. She is so cool. Truly. Pink hair, big orange double bass, smoky sassy vocals. She rocks.

If someone was to write a play about your life, what genre would it be? (eg. comedy, tragedy, melodrama, horror)
Soap Opera. I got everything going on except for the evil twin.

How do you deal with praise? With criticism?
When teaching (I teach an internet playwriting course through Rosebud School Of The Arts in Alberta) I am careful to give specific praise as well as specific constructive feedback. It's more important to be told what "is working", especially in the early development stages.Then a writer can focus on that and build on it. The dross will fall away. I always work with a dramaturge and have readings after my significant drafts. It's important to find a dramaturge you trust who "gets" what you're on about. There are some great dramaturges in Vancouver I've been lucky enough to work with: DD Kugler and Rachel Ditor regularly. I avoid sharing ideas and drafts with friends and family. I wait for them to attend opening night. I handle constructive criticism really well and am thankful for it. How else am I going to improve? Usually if someone has an overwhelmingly negative response to my work I say to myself, "oh too bad, they just don't get it yet." I find excessively negative people tiresome and self centred. They're usually envious.

Where would you like your work to be produced?
I think the NAC in Ottawa would be very exciting as well as ATP in Calgary. I've never had a play go to Montreal either and it's high time I came to Toronto again. Other cities I'm going to hit up are: Chicago, London, Berlin, New York, Prague, Hong Kong.

Where do you write? Pen or keyboard?
Keyboard. Though my first play was written on an electric typewriter. Yes, I am that old.

What would you like academics to write about your work in 50 years?
I dream of being part of an artistic sexual spiritual revolution where the major religions (Christianity and Islam in particular) further explore or return to their mystical feminist inclusive compassionate passivist sensual roots. How's that for lofty?

I am an avid supporter of the gay community.

I think mentorship is vitally important. I have personally committed myself to three emerging artists right now in an "unofficial" mentorship for the next five years. I feel it is my responsibility as an established artist to do so.

I'd like to be remembered as one of the citizens who rallied the Canadian government to value and support arts and culture which in turn, created an explosion of work on the world stage, firmly establishing Canada as a hotbed for theatre talent.

Geesh that's a long list. I better get to work.

What inspires you?
What I see, what I hear, what I touch, what I taste, what I smell. My plays are very sensual, in particular my latest two: Paradise Garden (world premiering at the Arts Club April 2010) and Sanctuary co-written with composer Aaron Krogman. I understand the world through my body. I guess that is why I am a playwright, not a novelist. My story must live within the blood, within a heartbeat, it must drip with sweat, laugh, cry, stumble, shake, dance, kiss, breathe. I write my nightmares and I also write my dreams. I have written the same man into my plays for twenty two years. I call him my beloved. I haven't found him. But my writing is my search for him. At least I have that.
Umbrella Talk

JohnMo said…
I ate every word of this voraciously, being one of Lucia's new students this fall. This helps confirm to me that this school year will be deliciously challenging!
August 29, 2011 at 10:11 PM