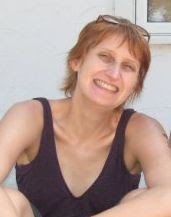 In this week's Umbrella Talk, Lindsay Price talks about the joy of writing for teenage audiences, the challenge of making science theatrical, and what inspires her to keep going.

A Little More About Lindsay Price

Lindsay is the resident writer for Theatrefolk, an independent publisher of original and adapted scripts for student performers. Her plays are regularly performed in schools across Canada and the United States with upcoming productions in Nebraska, Lethbridge, Georgia, California, New Hampshire and Florida.

Outside the high school arena, Lindsay most recently worked as dramaturg on Stand Up Eight, a circus show produced by the Aerial Angels. Upcoming, her play The Flying Bandit will be performed at the Sudbury Theatre Centre and she's thrilled to act as a playwright facilitator for the 2009/2010 Uth Ink program.

Her most exciting project to date is the publication of her a cappella musical Shout. It has always been her dream to write a musical and being able to provide such a challenging, rewarding piece for high school students is amazing.

You can find Lindsay's plays at: www.theatrefolk.com

What do you drink on opening night?
I write plays for high schools and student performers so there's really nothing stronger than Diet Coke at opening.

Who would direct the coolest production of one of your plays?
I saw a production of 'The Misanthrope' directed by Ivo van Hove at New York Theatre Workshop where mayonnaise landed on my leg. What he would do with a teen issue play I can only imagine.

What scares you? What can't you write about?
Causing a car accident. Oh, you probably mean in writing. Nothing. I adore writing in all genres, all subject matters comedic, bizarre or other wise out of my depth. I'm in the middle of trying to write a science play about nanotechnology which is so far out of my depth I take one step forward and seventy back. But that's fun too.

There are a number of things I can't write about given the age range of my market - which I find frustrating. I don't agree with the school of thought that says teenagers should be shielded from life (and swearing, apparently no teenager ever swears) as opposed to exposure and discussion. I certainly don't feel that they should be dropped in the deep end of the pool but why show them a whitewashed world, when it doesn't exist?

What do you want to write about that you haven't yet?
Nanotechnology. Trying to theatricalize science is a huge challenge which I have not yet been able to solve. The thing is, I think I will solve it because I can see the characters and I can see their struggle. Once I can figure out the humanity of a subject, the rest is just fitting together the puzzle pieces.

If someone was to write a play about your life, what genre would it be? (eg. comedy, tragedy, melodrama, horror)
Is pastoral goofy a genre?

How do you deal with praise? With criticism?
If you believe the good stuff, you have to believe the bad stuff, so I try for a happy medium. I appreciate it so much when someone has a positive experience with one of my plays and that's what I take away from any praise.

As for the criticism, I listen to those I trust to be constructive. It's essential to hear constructive criticism so that the work moves forward. I also go by the rule of three. If three people tell me the same thing separately then I have to look at it.

Where would you like your work to be produced?
Every high school in North America would be a nice start.

Where do you write? Pen or keyboard?
I create with pen and paper and rewrite on the keyboard. I adore the computer but there's nothing like the act of sitting down with a notebook and just the right pen and having the words flow out your brain, down your arm and on to the page.

What would you like academics to write about your work in 50 years?
Hmm. I think I would rather my work still being performed in 50 years rather than being talked about.

What inspires you?
My audience. There is no group more enthusiastic, more energetic, more optimistic, more loving of theatre than a high school drama group. I love writing for teenagers because I see the power of theatre up close in every production. It can be as simple as overcoming stage fright, or as huge as someone realizing they are not alone in their particular struggle. I have had teenagers tell me being in a play saved their life and if that's not inspiration to keep writing, to keep striving to create good work, I don't know what is.
Umbrella Talk

Unknown said…
Inspirational and funny! It's been amazing to watch Lindsay as a playwright over the past few years and see how her work has expanded both the market and her own ideas of where her writing belongs. And, as a playwright who has worked with her, she is a FANTASTIC dramaturg.
August 31, 2009 at 9:18 AM