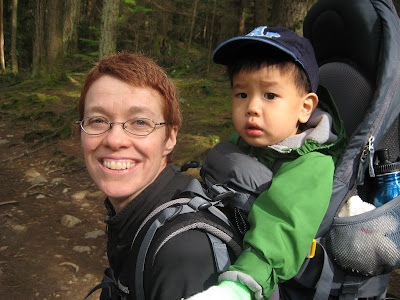 After a long hiatus (has it really been two months?), Umbrella Talk returns with Kathleen Oliver talking about praise and criticism, parenting, and showing off her son, Noah (see photo).

A Little More About Kathleen Oliver

Kathleen Oliver’s first play, Swollen Tongues, won the 1997 National Playwriting Competition and has been produced in Vancouver, Toronto, Ottawa, and London, England. Her other full-length plays are Carol’s Christmas and The Family Way. Shorter plays include Snow Queen, a monologue written in French, and Beautiful on a Budget. She recently completed the English translation of Stephan Cloutier’s Apocalypse in Kamloops. Kathleen teaches English at the Emily Carr Institute of Art and Design, and is a regular contributor to The Georgia Straight.


What do you drink on opening night?
Lots of water.

Who would direct the coolest production of one of your plays?
There are so many amazing directors I'd be thrilled to work with. But I'd love to have Dean Paul Gibson direct my next comedy.

What scares you? What can't you write about?
Hmmm. Obviously I'm so scared of it I don't even know what it is.

What do you want to write about that you haven't yet?
It's been a few years now since I've had the time and space to feel around for the right ideas. Becoming a parent has definitely given me a whole new set of things to consider. Ask me again in a couple of years when my kid starts school!

If someone was to write a play about your life, what genre would it be? (eg. comedy, tragedy, melodrama, horror)
Comedy. Most definitely.

How do you deal with praise? With criticism?
Cautiously, especially when the script is still in development. I've learned to just take in all the feedback and evaluate it later. Whatever resonates most strongly with my own perceptions is something worth following up on. After a play is finished--well, that's another story. The really outstanding examples of criticism tend to get instantly etched in memory. I can read a negative review once and still quote it verbatim seven years later. Praise doesn't seem to stick quite so deeply, which gives you an excuse to go back and read the nice things people said about your work. I try not to take any of it personally. Well, at least not the negative stuff. As a playwright who has also worked as a critic, I understand the challenges of both tasks. You might spend four years writing a play. A critic might have four hours to get the review in. Very different parameters.

Where would you like your work to be produced?
I'd love to see it produced all over the place, but is the question really "where would I like to travel to see my work produced?" Barcelona!!

Where do you write? Pen or keyboard?
Keyboard for scripts. Preferably at a proper workstation, not a laptop. Special notebooks (from Japan) and fountain pen (from Paris) for thinking on paper: inspiration, ideas, feedback, and notes to myself for subsequent drafts.

What would you like academics to write about your work in 50 years?
In 50 years? Any sort of attention would be welcome.

What inspires you?
People. Complicated emotions. Unresolved conflicts. Revenge. Seeing really great plays (wow! I'd love to be able to do that!) and really bad ones (holy crap! I can do better than that!).
Umbrella Talk