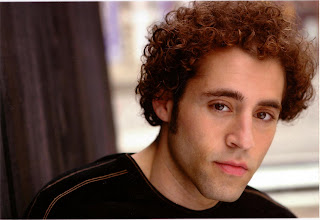 A little more about Michael Rubenfeld

Michael Rubenfeld is the Artistic Producer of the SummerWorks Theatre Festival. He is also the co-artistic director of Absit Omen Theatre with Hannah Moscovitch. Michael’s work as an actor, writer and director have been seen on stages across the country. In 2008, he was Dora-nominated for his play, My Fellow Creatures. He recently performed his play, Spain, in New York City (Bridge Theatre Company) and directed his short piece, An Exercise in Futility, for the Rhubarb! Festival (being remounted for the Clown Festival in June).

In May, he will be performing in his piece, The Book of Judith, co-created with Sarah Stanley in a large tent on the CAMH grounds. The piece is a one-man musical (with a choir) telling the story of his relationship to Judith Snow, a quadriplegic woman, and their attempt to make theatre together. Michael is a 2001 graduate of the National Theatre School.

What do you drink on opening night?
Whatever I can.

Who would direct the coolest production of one of your plays?
Sarah Stanley, or Quentin Tarantino.

What scares you? What can't you write about?
I'm not sure. I tend to only write about what scares me. That said, I think things like science and math scare me, because I don't feel smart enough to write a play about them. I would love to write a play like Copenhagen but it would probably end up coming out more like Proof.

What do you want to write about that you haven't yet?
Religion, death and my mother.

If someone was to write a play about your life, what genre would it be? (eg. comedy, tragedy, melodrama, horror)
Absurdist Tragedy

How do you deal with praise? With criticism?
I like praise as long as its sincere. It's very easy to tell who is full of shit and who isn't. Criticism is great also, as long as its mindful.

Where would you like your work to be produced?
New York, U.K and Germany

Where do you write? Pen or keyboard?
Always keyboard. I have romantic dreams of writing in leather bound books, but I am much too lazy.

What would you like academics to write about your work in 50 years?
Michael Rubenfeld was really brave and really hot.

What inspires you?
Courage, complexity and love.
Umbrella Talk