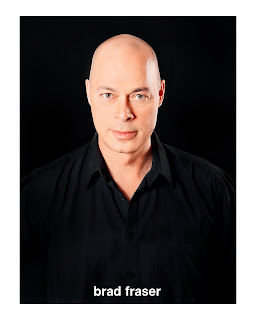 In this week's Umbrella Talk, Brad Fraser talks about his interesting pre-show drink, his happiness with the theatres that produce his work, and how he wants to be known in 50 years.

A little more about Brad Fraser

Brad Fraser’s work encompasses many forms of media over the last thirty years. His plays include; Unidentified Human Remains and the True Nature of Love, Poor Super Man, Martin Yesterday, Snake in Fridge, Cold Meat Party, Wolfboy, Young Art and the lyrics and book for the musical Outrageous, to name the most well known. These plays have been produced world-wide and have garnered numerous awards including The London Evening Standard Award for most promising playwright, The LA Critics Award and Toronto’s Dora Mavor Moore Award for best new play, The Manchester Evening News Award for best new play and many others.

His films are Love and Human Remains (directed by Academy Award winner Denys Arcand and winning Brad Canada’s Genie Award for Best Adapted Screenplay) and Leaving Metropolis- adapted from Poor Super Man (Winner of the Sydney Gay and Lesbian Film Festival Audience Favourite Award.) For television, he spent three seasons as a writer/producer on Queer As Folk for Showtime and Two seasons hosting his chat show Jawbreaker with Brad Fraser on Out TV, North America’s first gay and lesbian television station. Brad has also written extensively for radio in both Canada and England, turned out many print articles for the straight and gay press and a number of university lectures on the current state of the theatre and the AIDS crisis.

Brad’s newest play, True Love Lies, opened at the Royal Exchange Theatre in Manchester England on February 2, 2009 to great acclaim. A number of worldwide productions are pending. He is currently adapting Snake in Fridge into a graphic novel and hopes to have it finished by late 2009 with the film and television versions soon to follow. Check out Bradfraser.net for more info and occasional updates.

What do you drink on opening night?
The blood of forgotten theatre reviewers. After the show I often have a few Jack Daniels.

Who would direct the coolest production of one of your plays?
Now there's a loaded question. My experience has been, generally, that the more one expects from a director the more disappointed you will be. The director of my coolest productions has always been the inventive, confident one. I found him in England at the Royal Exchange Theatre. His name is Braham Murray.

What scares you? What can't you write about?
My childhood and my family. Although I must say every play I've written has been about something that scares me. I suspect I became a writer to deal with many of the fears and anxiety I was feeling as a younger person. My attitude has always been that if whatever you're writing doesn't frighten you in some way it probably isn't worth writing.

What do you want to write about that you haven't yet?
My childhood and my family.

If someone was to write a play about your life, what genre would it be? (eg. comedy, tragedy, melodrama, horror)
All of the above and often in the same scene. Great drama, even really good drama, defies conventions and boundaries and I've always been a genre crossing whore anyway.

How do you deal with praise?
I immediately distrust it.

With criticism?
Unless it's coming from someone whom I know and whose opinions I respect, I immediately distrust it.

Where would you like your work to be produced?
I'm pretty happy with the theatre that produce me now although I would like to have a commercial Broadway, West-End success. I'm particularly fond of the foreign theatre and language productions I've seen of my work. I think I could also be produced in my home country more.

Where do you write? Pen or keyboard?
I write in my well ordered office and many anonymous hotel rooms. I've never written with a pen or pencil and am proud of my very fast typing skills. I love my computer for revisions but I miss the muscularity of the typewriter.

What would you like academics to write about your work in 50 years?
In 50 years I will be one hundred years old. I hope the academics will write about how attractive and vital I am for my age. Should that not come about I hope they will say I wrote without fear of disapproval and challenged the reviewers and audiences of the day to examine their own fears and prejudices. I also hope they will say I always set my plays in the present tense, that I wrote a kind dialogue that was reflective of the language, thought and rhythm of the day and that I upset a lot of theatre people and complicit audiences by demanding that theatre be a predominantly emotional experience- breaking away from the dry, intellectual arguments that have been passed off as interesting theatre since Shaw started writing. This movement coincided with the death of theatre as a popular art form and I suspect there's a direct correlation.

What inspires you?
The beauty of the world we live in and the love many have for their fellow man, the cruelty and indifference with which people mistreat one another, the pain we all carry, the essential goodness of most people and the ability of really good theatre to break the confines of time and space to tell stories that reverberate on a multitude of levels. Also money, alcohol, drugs, sex, music, movies, other plays and comic books.
Umbrella Talk

Emily Niewendorp said…
What a great interview. Thanks for sharing your talk with Brad Fraser. I will go to the bookstore to read his plays.
May 7, 2009 at 5:33 AM