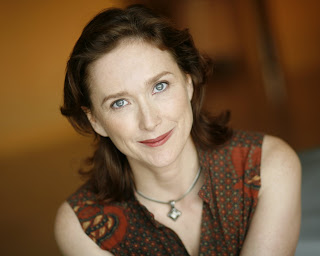 Welcome to this week's Umbrella Talk with playwright Leanna Brodie. This week Leanna talks to us about what she drinks on opening night so that she doesn't get too dehydrated, maudlin, flirty or broke; being produced in a regionally segregated country; and being inspired by a bold hero such as Wang Wei Lin.

A little more on Leanna Brodie


Leanna Brodie is an actor, writer, and translator. Her plays include For Home and Country, The Vic, and Schoolhouse (all published by Talonbooks Ltd.), as well as the CBC radio dramas Invisible City and Seeds of Our Destruction. She was the first Canadian invited to the ACT/Hedgebrook Women Playwrights’ Festival in Seattle; has been Playwright-in-Residence at the Blyth Festival; and has translated Philippe Soldevila’s Conte de la lune for Théâtre des Confettis. Recently, she contributed part of the libretto for David Ogborn’s acclaimed site-specific piece, Opera on the Rocks, and her libretti for works by Ogborn and by Craig Galbraith were heard as part of Tapestry New Opera Works’ Opera to Go 2008. Brodie is currently translating plays by Sébastien Harrisson, Larry Tremblay, and Louise Bombardier. This season, she is working on a new play as Playwright-in-Residence at the 4th Line Theatre; she will be appearing in Carmen Aguirre’s The Refugee Hotel for Alameda Theatre; and The Angle of Reflection (her libretto for New Zealand composer Anthony Young) will be performed by the Auckland Philharmonia Orchestra. Schoolhouse is slated for at least two more productions this season: it has been seen by over 20,000 Canadians so far.

What do you drink on opening night?

Scotch. Single malt if I think it's going to do well: house blend if not. Interspersed with lots of water or cranberry-and-soda, so that I don't get too dehydrated, maudlin, flirty, or broke. I'll take red wine if it's free, of course.

Who would direct the coolest production of one of your plays?

There are some wonderful directors I would love to work with, and some I have been fortunate to work with already: but if I ran the world, I would mix things up a little and hook up with people who wouldn't normally be thought of as a match for me. I'd love to have Schoolhouse or For Home and Country directed by Weyni Mengesha or Phil Akin, because they are both rigourous yet highly creative theatre animals who have a lot of insight into human nature, and they'd make me look good. I'd love to see a production of Schoolhouse where the children are created by a puppetteer, like Eric Woolfe or Hélène Ducharme. I'd love to do a play with Tom Diamond: everyone thinks of him as an opera guy, but his theatre instincts are superb. I don't romanticise the French-language theatre scene in Canada, because I've seen dreck in Quebec. But there is a tradition there of fearlessly incorporating dazzling, imagistic, imaginative visual elements that has long inspired me. (In fact, there's a popular conception of "scenic writing" or "scenography" where the director is an equal -- some would say, dominant -- partner in the writing of the piece. That can be a mixed blessing for a writer, of course.) I had to cut a lot of visual and multi-media elements from The Vic because we didn't have the means to pull them off. I wonder what, say, Érik Jean would do with my original conception of the piece (or Brigitte Haentjens, though for her I'd presumably need to be dead first).

On the world stage: Ariane Mnouchkine for the pageant plays, George C. Wolfe for everything else. Because they make words sing and stages dance.

Most of all, I'd love to see Jovanni Sy direct my work, because, among other things, he is perhaps the only person who completely shares my sense of humour.

What scares you? What can't you write about?

Boring the audience scares me, which is why I don't write about myself. Well, I do, of course, but you wouldn't know exactly when or how unless you knew me very well indeed. On the other hand, I can't write about people or worlds that I don't feel I connect to at a profound level. That insight can come from instinct or personal experience, or it can be achieved through a very deliberate process of research, observation, and reflection. But if I don't feel that I have access to the truth of a person and her circumstances, I don't feel confident enough to write about her.

I also don't write about certain people or stories that I do know intimately, in cases where I feel that it would be a violation to do so. This is where I differ from the Truman Capotes of this world, and from the Bullets Over Broadway theory of the artist as a ruthless absolutist devoid of personal loyalties or boundaries. I've been called cruel and harsh and dark and provocative, yet there are lines of honour that I have not crossed, and I don't think my work is any the worse for it. I do think that one of the ways you define yourself as an artist is by deciding where you draw your lines.

What do you want to write about that you haven't yet?

How long have you got?

Top of my list at the moment: the plays I owe to Nightwood (infanticidal mothers) and Blyth (evangelical farmers, urban gays, teenage runaways). Also, Gertrude Bell, who invented Iraq.

If someone was to write a play about your life, what genre would it be? (eg. comedy, tragedy, melodrama, horror)

A bilingual feminist puppet play, with guest appearances by Xing Bang Fu (as the Monkey King), Margaret Cho, and Mump and Smoot.

How do you deal with praise? With criticism?

Do you mean written, published, public praise or criticism? About as poorly as the average person, I suppose.

I pay very close attention if and when someone I respect says something insightful about a work-in-progress. I then have to decide whether or not the specific opinion they have voiced will help me to get closer to what I'm trying to achieve, to my truest impulse or sense of the piece, or not. Theatre is a collaborative art form in which good ideas can come from anyone at any point in the process of creation, and if you don't see that shared creativity as a gift, then you should go away and write a novel, or perhaps take over a small Balkan country. However, sometimes people can make a comment or suggestion that is absolutely valid yet doesn't approach that core idea of what I'm trying to say or do. And the person who bears the final responsibility for deciding that, is me.

In terms of work that's been presented to the public, what's really wonderful is when people write or say to me that the work I have been a part of has affected them in some way: if the focus is on them, not on me. Strangely, that makes me feel more alive than anything they could say about me directly: as if my time on this earth has had some sort of consequence, which is always a bit of a concern for artists, I think.

Where would you like your work to be produced?

Well, everywhere, obviously. Within Canada, I would love to be translated into produced in French in Quebec. I would love a professional production in western Canada: my first professional production in Atlantic Canada is a strong possibility this year, which makes me very happy. We are so regionally segregated in this country! Of course, I would love it if I could get a single production of Schoolhouse in an urban theatre. I like to think that if people around the world can accept Our Town and Playboy of the Western World as having something to say to the human condition, then my Baker's Creek plays could achieve some purchase outside the rural environments about which I am ostensibly writing.

Realistically, though, I know I would have a better shot at wider production if I could write stories with four people in them (instead of eight women, for example). I've just never been drawn to those stories. I have an unfortunate taste for the epic.

Where do you write? Pen or keyboard?

First draft: pen. Subsequent drafts: keyboard. But even then, any major rewriting is done with pen, paper, and sometimes scissors and scotch tape.

What would you like academics to write about your work in 50 years?

If someone is still writing ANYTHING bout my work in fifty years, I will come back from the dead to buy her a scotch.

"In writing with humour and insight of a varied and distinctive panoply of characters, Brodie showed an infectious compassion for all, without pity or sentiment for any. That is why audiences still love to see her plays, and actors still love to play them.

They also single-handedly created world peace, which most people see as a plus."

That's a big question. I wrote For Home and Country because I was inspired by the women who banded together to form the Women's Institutes: to provide health education to Canadian rural women; to allow them to organise on behalf of their families and communities; and to relieve some of their terrible isolation. I'm inspired by Wang Wei Lin standing in front of the tanks in Tiananmen Square, but also by the kind of long-term, quiet heroism that involves years of hard work and determination and never gets a medal or a TV movie. I think that getting up every day for the rest of your life and battling your demons, or a corrupt or indifferent government, for example, requires just as much courage as pulling someone out of a fire. Not courage in a crisis, though: courage with stamina.

Artistically, I'm inspired by fearless and surprising actresses who make me want to write for them, and by the way certain directors use the theatrical space. I get inspiration from painting and visual art: there's a scene in one of my plays that was directly inspired by a Joyce Wieland quilt. And while I'm actually writing, I find that certain pieces of music will set the mood for me or keep me on track. While writing Schoolhouse, I put kd lang's Hymns of the 49th Parallel on repeat.

Thanks again for reading this week's Umbrella Talk. If you are a playwright that has been produced a few times here in Canada or elsewhere and would like to talk to us too, please send us an e-mail to obu@web.ca.
Umbrella Talk

Unknown said…
I'll second wanting "Schoolhouse in an urban theatre", and add my hopes for productions in all regions. We do tend toward regionalism, so kudos for doing your part in bringing people closer by providing good translations.