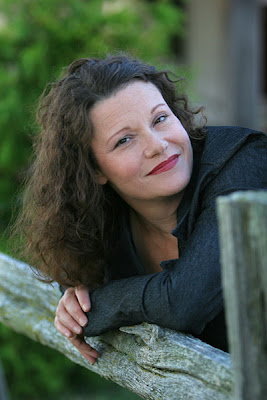 Welcome to this week's Umbrella Talk with playwright Alex Dallas. Alex talks to us about the play about her life that would be a surreal comedy full of stories that are sadly all true; about being inspired by the sense of humour that exists in the UK and tells us where she writes (at a computer or keyboard)---hint, she is addicted to word count.

A little more on Alex Dallas


Alex Dallas is a founding member, actress and writer with Sensible Footwear for 18 years. Her first one woman show, Goddess, was directed by Tanja Jacobs and aired on DNTO. Other shows produced include Nymphomania and Drama Queen, both directed by Carolyn Hay. Her shows have also been aired on Bravo TV's The Singular Series. Alex has performed at Fringes every year since 1989 in Canada and performed at Edinburgh Fringe---1982 on, and she has received rave reviews and was named "Queen of the Fringe" in the press. So Alex has toured to every major theatre in Canada and her daughter Ruby Dallas was even conceived on a Fringe tour!
Career highlights include sharing stages with Billy Bragg, The Proclaimers, Robbie Coltrane, having Sir Ian Mackellan and Alan Cumming come to see Drama Queen in Vancouver and take her out for dinner afterwards, performing at the Adelaide Fringe and being invited to the Canadian Embassy for drinks as a visiting artist. What? Fringe performers are taken seriously in Australia?
Additional career highlights are being directed by Ron Jenkins in Greek and acting with him in Sara Kane's North American premiere of Crave, playing opposite Ryan Gladstone in Macbeth at Second City and managing to keep a straight face with Chris Hilarious Gibbs on stage, living with TJ Dawe and inspiring each other.

What do you drink on opening night?
Usually I drink anything and anyone under the table....closing nights are usually better for me...Long Island Iced Teas have got me into a lot of trouble!


Who would direct the coolest production of one of your plays?
My dream directors would be Mary Francis Moore and Ron Jenkins...separately of course. MF because she is so detailed and has a brilliant focus on the script. Ron because he is hilarious and always has an original and amazing vision. Both because they don't have a pretentious bone in their bodies.....and they make me a better actor.

What scares you? What can't you write about?
Stand -up comedy terrifies me. Eating and drinking on stage is pretty scary. Nearly bit the dust on stage as Madam Arcati when a huge cocktail olive got stuck in my throat.
Can't write about many personal things yet as I am really scared of being self-indulgent. That would be my nightmare critique.

What do you want to write about that you haven't yet?
I want to write about things poiltical I think. Stuff that angers me, injustice...it's just so hard to make it funny and accessible without looking worthy and didactic. On the other hand I want to write a Canadian Bridget Jones chick Lit type thing just for fun. You know so it can become a screenplay and I can make the millions I know I should be making.
If someone was to write a play about your life, what genre would it be? (eg. comedy, tragedy, melodrama, horror)

My life is a surreal comedy. A Dramedy I expect. At the end of my shows people ask if the stories are true and the sad truth is yes, they are all true. My Father drowning in Cannes, my playing Puck on a trampoline, my encounter with Jack Nicholson...all true, but sometimes I imagine that people just presume I am a pathological liar.
How do you deal with praise? With criticism?
Well obviously I believe all the great reviews. I was brought down to earth horribly in Ottawa. I was lying in bed listening to CBC radio giving me a rave review, a glowing review, a review I would have written , when I suddenly heard the reviewer say, " as she propels her squat little body around the stage!" That ruined the next ten years of my life!
No-one can critique me like my mother so everything else is pretty much water off a duck's back.
Where would you like your work to be produced?
I'd like my work to be produced in any theatre in Canada, the USA, the UK and Australia. I love theatres. I don't care where they are, but I want a proper run...months of going to work at the same time in the same place. 25 years of touring makes me want a comittment.
Where do you write? Pen or keyboard?
I write at a computer but I scribble the ideas on any old bit of paper if it comes to me. The computer makes me think it's real writing and I am addicted to word count.
What would you like academics to write about your work in 50 years?
I'd like to think that my work with Sensible Footwear will be seen as unique and innovative. For a good ten years we were the only trio of feminist comedians in the world which I am very proud of. Also we were the same three woman for 15 years for which we all deserve a medal. For my solo work I would like people to note that I was brave enough to be myself on stage and that I told my stories and bared my soul in away that many people don't. The subject of women's sexuality is always in my work and that has still been an issue. I hope that in years to come we will be well past that being an issue but my contribution will be acknowledged.
What inspires you?
I am inspired by overheard conversation on the bus, by my childhood, by the true stories of family and friends, by terrible boyfriends and passionate love affairs, by my daughter, by the utter stupidity of mankind, by the bizarre and the trifling, by minutae and by great ideas. And by the many wonderful talents that have come before me. Luckily I was raised in the UK and I am inspired every day by the amazing sense of humour that exists there. Everyone you meet is funny, sarcastic, bitter, fantastic and truly inspiring!
Thanks again for reading Umbrella Talk with Alex Dallas. Next week we chat with playwright Mark Brownell. If you are a playwright who has been produced a few times here in Canada, or elsewhere, and would like to talk to us here too, please send us an e-mail to obu@web.ca. Also, please join our facebook group blognetwork at http://apps.facebook.com/blognetworks/blogpage.php?blogid=70497.
Umbrella Talk