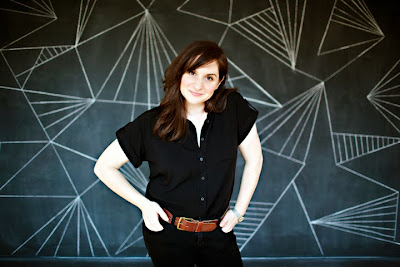 Something very cool is going on in Winnipeg. (Besides the weather.) Their theatre season will see premiers by 7 women playwrights, which as a percentage of total premiers may be the highest in a Canadian city theatre season. (I'm just guessing but sadly, either way it's pretty remarkable.) They're being referred to as the Group of 7 and have done some joint publicity. I'm trying to get as many of them here at Umbrella Talks as possible. Here's the first.


A Little More about Alix Sobler

Born and raised in New York, Alix Sobler is currently a proud resident of Winnipeg, Manitoba.  She is a writer and performer whose solo work and plays have been seen all over North America. A Fringe Festival veteran, she has toured Canada many times and she was a regular on CBC's DNTO from 2006- 2010.  She is serious about her love of pets and homemade crafts. Her new play The Secret Annex will premiere at the Royal Manitoba Theatre Centre in February 2014. Find out more about her at alixsobler.com.


What do you drink on opening night?
Come on, really? Champagne! What else?

Who would direct the coolest production of one of your plays?
Aside from my current director, Heidi Malazdrewich who is amazing, brilliant and kind? There are many wonderful directors I would love to work with both in Canada and the US. At the moment I am super interested in the work of Nicole Holofcener.

What scares you? What can't you write about?
Israel and Palestine. The idea of the research alone scares me.

What do you want to write about that you haven't yet?
It's not so much what I want to write ABOUT for me, but what genre I want to write in. I would really like to write a musical. Also I would love to write for television. I love the idea of crafting a whole season, even a whole series. It gives you so much time to develop character and relationships.

If someone was to write a play about your life, what genre would it be? (eg. comedy, tragedy, melodrama, horror)
It would be a comedy with tragic elements. You know, like life itself.

How do you deal with praise? With criticism?
I love it all! You can't take every single thing you hear to heart, everyone brings their own baggage when watching or reading a play. But it is valuable to hear what moved people and left people confused or wanting more. It's an art form that is very audience focused. If you are not interested in praise and criticism, why do it?

Where would you like your work to be produced?
I am very excited to have my work produced at the RMTC, that is a bit of  a dream come true. But I would love to see my work done at Soulpepper, Tarragon, the Arts Club, the Guthrie. As a born and raised New Yorker, there is a special place in my heart for the Public, Playwright's Horizons and many others. Broadway would also be nice.

Where do you write? Pen or keyboard?
A bit of both.

What would you like academics to write about your work in 50 years?
"Alix Sobler had much to say about the human condition, but if one must take a simple lesson away from her work it is this: love is awesome and life is worth it."

What inspires you?
Memories. History. Images. Dreams. These days I can find the seed of a story just about anywhere.
group of 7 Umbrella Talk