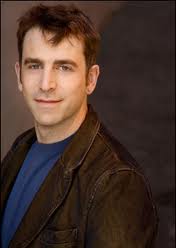 First off, apologies for taking so long between drinks. I had major surgery recently and haven't had as much energy as I've hoped. I have 3 interviews for you that need to be formatted and posted. Hopefully I'll be in a rhythm soon.

But I finally have one today! I first heard about Joel Fishbane through his interaction in the theatrosphere. An intellegent and thoughtful voice, I'm excited to have him here at Umbrella Talks.


A Little More About Joel Fishbane

Joel Fishbane is an author of theatre, fiction and non-fiction whose work has been produced and / or published in Canada, the United States and overseas. Most recently, his play A Place in the Country was named a runner-up in Infinitheatre's Write-On-Q Contest (2012). His plays Short Story Long won the 2010 Toronto Fringe New Play Contest and has gone to have readings in Ohio, England, and New York. Published work is available for Signature Editions and Eldridge Editions. He writes a weekly column for the Charlebois Post and his non-fiction has been or will be seen in Canadian Theatre Review, Theatre Journal, the Antigonish Review and CBC's Wiretap. New fiction will appear in future issues of Witness and Per Contra. He has a diabetic cat and sometimes plays the clarinet. For more information, please visit www.joelfishbane.com

What do you drink on opening night?
If it's someone's else's show, then I drink beer. If it's a show I wrote, then I drink Jack Daniels, usually starting around noon.

Who would direct the coolest production of one of your plays?
If it's a musical: Harold Prince. Anything else: Andrew Shaver, AD of Sidemart Theatrical Grocery.

What scares you? What can't you write about?
The thing that scares me most is creating theatre that's neither good or bad, theatre that's simply ordinary. If someone leaves one of my shows having neither particularly liked or hated it - if I haven't provoked any reaction at all - then that, for me, means I've failed. As for things I can't write about....I can't write about things I don't have any interest in. Which is to say I don't know anything about ancient Rome - but if I had a compelling idea that forced me to explore that world, I'd be all for it. I also can't write about anyone who is happy and content. Happy, content people make for boring theatre. The unhappier a character is, the more interested I am in writing about them because unhappy people always have something concrete to fight for.

What do you want to write about that you haven't yet?
War. Not necessarily a play set during a war, but something the deals with war and its function in society. But I'd also like to write something that explores the horrors of the battlefield, mostly because it's a place I'll never be. Like Woody Allen, in the event of war I'd definitely be a hostage. And the kidnappers would probably try to give me back.

If someone was to write a play about your life, what genre would it be? (eg. comedy, tragedy, melodrama, horror)
Musical. No question. If anyone ever does a biography on me and it ISN'T a musical, then they aren't doing me any justice.

How do you deal with praise? With criticism?
Praise is great when it's unasked for and comes from a complete stranger. Case in point: I recently got an email from someone who had read a short story I published two years ago. The letter came entirely out of a desire to share his gratitude with me for writing the piece. Which is not to say it isn't great when my friends and family appreciate my work - but it's the sort of praise which is always tinged with the suspicion that they aren't being as honest as they might otherwise be.

As for criticism, I adore it, especially when it's been well-thought out. Some criticism is useless - "I hated it", "It was boring" - but anytime I get a remark that has some sort of reasoning behind it, I'm all ears. A lot of criticism has been invaluable in the development of most of my plays and fiction - if I think a comment has merit, I will almost always see how I can use it to make the piece stronger.

Where would you like your work to be produced?
Broadway and the West End. Even if it fails, at least I can say I was there.

Where do you write? Pen or keyboard?
Keyboard. I can`t write as fast as I think, which is apparently 65 words a minute.

What would you like academics to write about your work in 50 years?
First of all, if academics are writing about my work in 50 years, then I don`t really care what they`re saying. The fact that they`re writing about it is good enough. But it would be great if someone coined the word `Fishbanian`and if it was used to describe other plays. As in "You know, I just saw that new play and I could really see the Fishbanian influence." That would rock.

What inspires you?
Good writing. And pretty much every girlfriend I've ever had.
Umbrella Talk