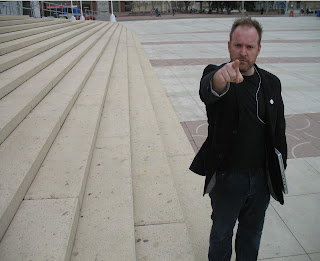 So here we are, the return of your favourite playwright interviews, Umbrella Talk! A reminder of the criteria: you must have had 2 plays professionally produced. By that we mean the pieces have moved outside of workshop/school and has appeared in front of a paying audience.We don't care where that audience was. We welcome playwrights from all over the world to answer our 10 questions.

I am delighted to kick things off with Chris Craddock. I first became aware of his work when I fell in love with Boy Groove. (The link is to an awesome mock music video for the band.in the play.) He also has an awesome twitter feed, @craddo.


A Little More About Chris Craddock

Chris is an Edmonton based Actor/Producer/Writer. His theatre work in Canada has been recognized with four Sterling Awards and two Dora Mavor Moore Awards, and his film Turnbuckle was nominated for two Ampia Awards.  He is the proud recipient of the Embridge Emerging Artist award, the Centennial Medal for his contribution to the Arts in Alberta, and the Alberta Book Award for his collection of plays for teens Naked at School. His musical BASH’d (co-written and performed with Nathan Cuckow) received a 2007 GLAAD media award.

Chris graduated from the University of Alberta’s BFA Acting Program in the spring of 1996 and since then he has worked on stages all across Canada.

Chris has recently returned from New York City, where he was performing Off-Broadway with his award winning musical BASH’d! He is the screenwriter for the feature film, “The Pharmacist/La Pharmacien”.  Chris was the 2010 Writer in Residence at the Edmonton Public Library.

What do you drink on opening night?
Beer. Maybe a crown and coke if I'm tired.

Who would direct the coolest production of one of your plays?
Robert Lepage is quite good, as I understand it. If he's not available, call Bradley Moss or Ron Jenkins.

What scares you? What can't you write about?
Lately I become scared that I could be a sincere target for rabid conservatives. Some subjects I think twice about on this level.

What do you want to write about that you haven't yet?
My son.

If someone was to write a play about your life, what genre would it be? (eg. comedy, tragedy, melodrama, horror)
90's drug comedy.

How do you deal with praise? With criticism?
Praise is easier, though can become sugary over time. Handling the reception of criticism has everything to do with how that criticism is delivered and from whom. I range from "totally cool" to "dick".

Where would you like your work to be produced?
Germany and Austria. those guys are crazy.

Where do you write? Pen or keyboard?
I've always been a computer guy. My first play was written on a Colecovision Adam. I like the functionality of being able to move text at will and so forth. Rap I have to scribble out for whatever reason.

What would you like academics to write about your work in 50 years?
I'd be honoured to be remembered at all. I don't know. I hope these probably never to exist academics say I kicked the ball of theatre forward into the new consciousness a little, was artistic and accessible, funny and honest.

What inspires you?
Anger. Wonder. My son.
Umbrella Talk