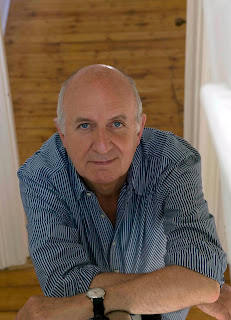 This is a first for our blog, a UK playwright! We've decided to open up the series to writers from the UK and the US, so feel free to contact us.

Alistair Beaton is the translator for the current Canadian Stage production of The Arsonists, playing at the Bluma Appel Theatre at the St Lawrence Centre for the Arts to rave reviews. Canadians don't know that he is one of the UK's top satirists and we're deeply honoured to have him on our blog.


A Little More About Alistair Beaton

Alistair Beaton is a political satirist whose work spans theatre, television, radio and publishing. Select theatre credits include Caledonia (Edinburgh International Festival 2010); King of Hearts (Hampstead Theatre 2007); and Feelgood (winner the Evening Standard Best Comedy Award in 2001). Beaton is fluent in German, Russian, French and English. He translated and adapted The Government Inspector from Russian for the Chichester Festival Theatre in 2005, which was remounted at the American Conservatory Theatre in San Francisco in 2008. He has also written new English versions of Johann Strauss’ Die Fledermaus and Jacques Offenbach’s La Vie Parisienne. In 2007 Beaton translated Max Frisch’s The Arsonists, which premiered at London’s Royal Court Theatre. Beaton’s work for television has earned him honours such as a Broadcasting Press Guild Awards for Best Single Drama and nomination for a BAFTA in 2007. Additionally, Beaton has done work for radio and is a best-selling author.

What do you drink on opening night?
A glass of white wine while hiding during the interval - the interval being the most excruciating moment for the playwright. On occasion I have considered swapping the white wine for hemlock.

Who would direct the coolest production of one of your plays?
Morris Panych, of course. Should he be unavailable, I would have to fall back on Barack Obama, who must be longing for a change of job.

What scares you? What can't you write about?
Hmmm, how much time do you have? I find it hard creating positive characters, much prefer monsters of one kind or another, or at the very least, gravely flawed characters. I also find love hard to write about. God knows what that says about me.

What do you want to write about that you haven't yet?
The fucking bankers.

If someone was to write a play about your life, what genre would it be? (eg. comedy, tragedy, melodrama, horror)
Comedy tinged with horror.

How do you deal with praise? With criticism?
Praise? Can't get enough of the stuff. As for criticism, it's fine if a) it comes from soemone who knows what they're talking about and b) if it comes in time for me to do some fixing of the script.

Where would you like your work to be produced?
Well, just about everywhere. (I feel the person who framed these questions doesn't quite grasp the enormous size of the authorial ego).

Where do you write? Pen or keyboard?
Keyboard, except when writing lyrics, when I like to scrawl over multiple sheets of paper, covering the floor with first drafts.

What would you like academics to write about your work in 50 years?
Torn between saying 'anything at all would be fine' and 'God almighty, please let me not be written about by academics, what a fate.'

What inspires you?
I'm assuming I'm allowed at least one pompous answer, so here it is: the outrage I feel when I witness injustice and abuse of power.