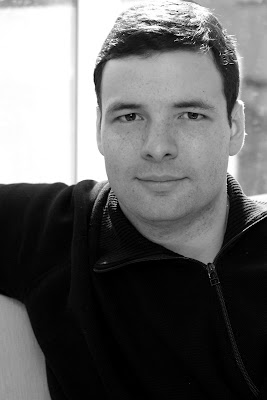 Talking with us this week under our one big umbrella is playwright Nicolas Billon. Nicolas tells us what cheap drink he has on opening nights of his plays, which handful of Canadian directors he would want to direct the coolest productions of his plays and why he can't right about random violence and torture in his plays.

His first play, The Elephant Song, began as an exercise for a university class. At the urging of his teacher, he turned into a one-act play, with the intention of producing it himself in Montreal. However, a copy made it's way into the hands of Richard Monette, the artistic director of the Stratford Festival of Canada. In 2004, The Elephant Song opened at Stratford's Studio Theatre. That winter, Nicolas was invited to become the first playwright to attend Stratford's Birmingham Conservatory for Classical Theatre Training. In early 2005, The Elephant Song returned to Montréal for a French production at the Théâtre d'Aujourd'hui, in a translation by Nicolas and directed by René Richard Cyr.

Stratford produced Nicolas' second play, The Measure of Love, in 2005. Nicolas returned to the Birmingham Conservatory to work with his mentor, Bernard Hopkins, on a production of The Duchess of Malfi.

In June 2006, Nicolas moved to Toronto for a two-year contract with Soulpepper Theatre as a member of their inaugural Academy. During his tenure, Nicolas created a new version of Chekhov's Three Sisters, worked as the production dramaturge for Brecht and Weill's The Threepenny Opera and William Saroyan's The Time of Your Life, and co-created BLiNK with the other eight members of the Academy.

What do you drink on opening night?
Water only, and maybe a glass of wine once it's all done. I'm a cheap drunk.

Who would direct the coolest production of one of your plays?
Well, there's no shortage of interesting directors! There's a handful of Canadian directors that I would love to work with, mostly because I've seen (and admired) their work: Francois Girard, Weyni Mengesha, David Storch, Jennifer Tarver, Chris Abraham, and Stephen Ouimette come to mind.

What scares you? What can't you write about?
Random violence and torture. I can't stomach it on film, and I've never seen it work on stage unless it's heavily stylized.

What do you want to write about that you haven't yet?
I was never a follower of the adage of "write what you know," but I think that now I might be in a place where I would like to write a play about something more personal.

If someone was to write a play about your life, what genre would it be? (eg. comedy, tragedy, melodrama, horror)
I've been very lucky throughout my life and career, so I think the only way to make any kind of biography palatable would be to make a farce.

How do you deal with praise? With criticism?
I ignore both, unless I completely trust the source.

Where would you like your work to be produced?
Right this moment, I think New York's MCC Theatre, the Tarragon in Toronto, or the Royal Court in London.

Where do you write? Pen or keyboard?
I work a lot in cafés, but I'm finding myself pining more and more for a space of my own. Most of my writing is done on my laptop, but I occasionally write longhand.

What inspires you?
People, mostly. What we do, what we don't; how wonderful we can be, and how horrible. I'm obsessed with our potential to be great and our constant failure to achieve it.

As always, thanks for reading this week's Umbrella Talk. We have a handful of playwrights lined up for the upcoming weeks. Next week, we talk with playwright Marcia Johnson.

If you are a playwright that has been produced in Canada or elsewhere and want to chat with us, please send us a message at obu@web.ca.
Umbrella Talk